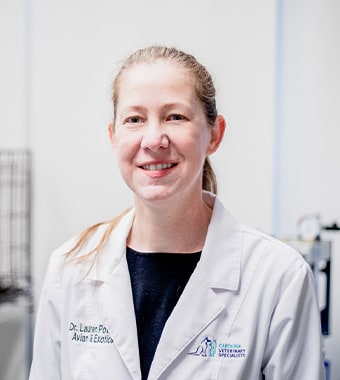 Dr. Powers worked in general private practice for a year before her residency and for five years after her residency at North Carolina State University College of Veterinary Medicine (NCSU-CVM) before joining the staff at Carolina Veterinary Specialists in 2002.

Dr. Powers is also an adjunct assistant professor in avian medicine at NCSU-CVM. She served as the president of the Association of Avian Veterinarians (AAV) from 2017 to 2018 and as the chairperson of the AAV Research Committee from 2006 to 2012. She served as vice-president of the Association of Exotic Mammal Veterinarians (AEMV) from 2007 to 2009, and served as a board member for the AEMV from 2007 to 2010. She was a 2011 and 2012 recipient of the AAV President’s Award for Outstanding Service, the 2008 recipient of the AEMV President’s Award, and has received numerous other professional honors and awards.

Dr. Powers has written more than thirty scientific journal articles and book chapters and has lectured extensively locally, regionally, nationally, and internationally. Dr. Powers completed a clinical drug safety trial for the use of Advantage Multi for Cats (Bayer) in domestic ferrets, and has conducted several other research studies while at Carolina Veterinary Specialists, including an investigation into the metabolism of the anticonvulsant drug phenobarbital in African grey parrots.

Speer B, Powers LV. Anatomy and disorders of the beak and oral cavity of birds. Veterinary Clinics of North America: Exotic Animal Practice. 2016;19(3):707-736.