If your dog is suffering from a torn ACL (CCL) our Huntersville vets may recommend TPLO surgery to repair the injury. TPLO surgery can help to restore function to your dog's leg and allow them to return to their regular active lifestyle.

What is the CCL, Cruciate, or ACL in dogs?

Unlike the ACL in humans, a dog's CCL is always a load bearing ligament because the dog's leg remains bent when standing. If your dog's CCL becomes injured or torn, your dog's knee will become painful and unstable, reducing your dogs ability to run and walk normally. 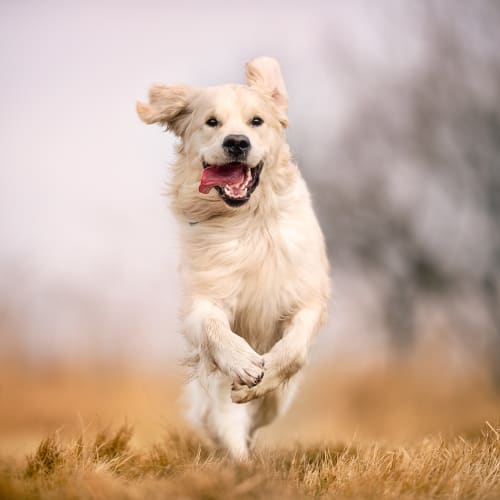 Signs & Symptoms of a CCL Injury in Dogs

If your dog has a mildly injured CCL but continues to have an active lifestyle including long walks, running and jumping, the injury will likely worsen and symptoms will become increasingly more pronounced.

It is estimated that 60% of dogs with a CCL injury in one leg will go on to injure the other knee.

TPLO surgery eliminates the need for the CCL ligament by reconfiguring the knee, rather than supplementing the CCL with an artificial ligament through an Extracapsular Repair.

When your dog has TPLO surgery a curved cut is made in the tibia from the front to the back, then the top section (the tibial plateau) is rotated backward until the angle between the tibia and femur is appropriately level. Once the tibial plateau is in the desired position a metal plate is attached to the bone to stabilize the two sections while the bones heals in their new configuration.

Recovery from TPLO Surgery in Dogs

Recovery from a ccl injury takes time, however recovering from TPLO surgery is relatively quick. Many dogs will be walking on the leg as soon as 24 hours after surgery, and most will be bearing moderate amounts of weight on the leg within 2 weeks.

Following your vet's post-operative instructions is essential in order to avoid further injury to the leg while it heals. Your vet may recommend reducing your dog's activity for 12-16 weeks following TPLO surgery.

After about 6 months your dog should be able to return to full physical activity, including chasing balls, jumping and running.

To find out more about TPLO surgery to repair your dog's CCL, contact Carolina Veterinary Specialists in Huntersville today.